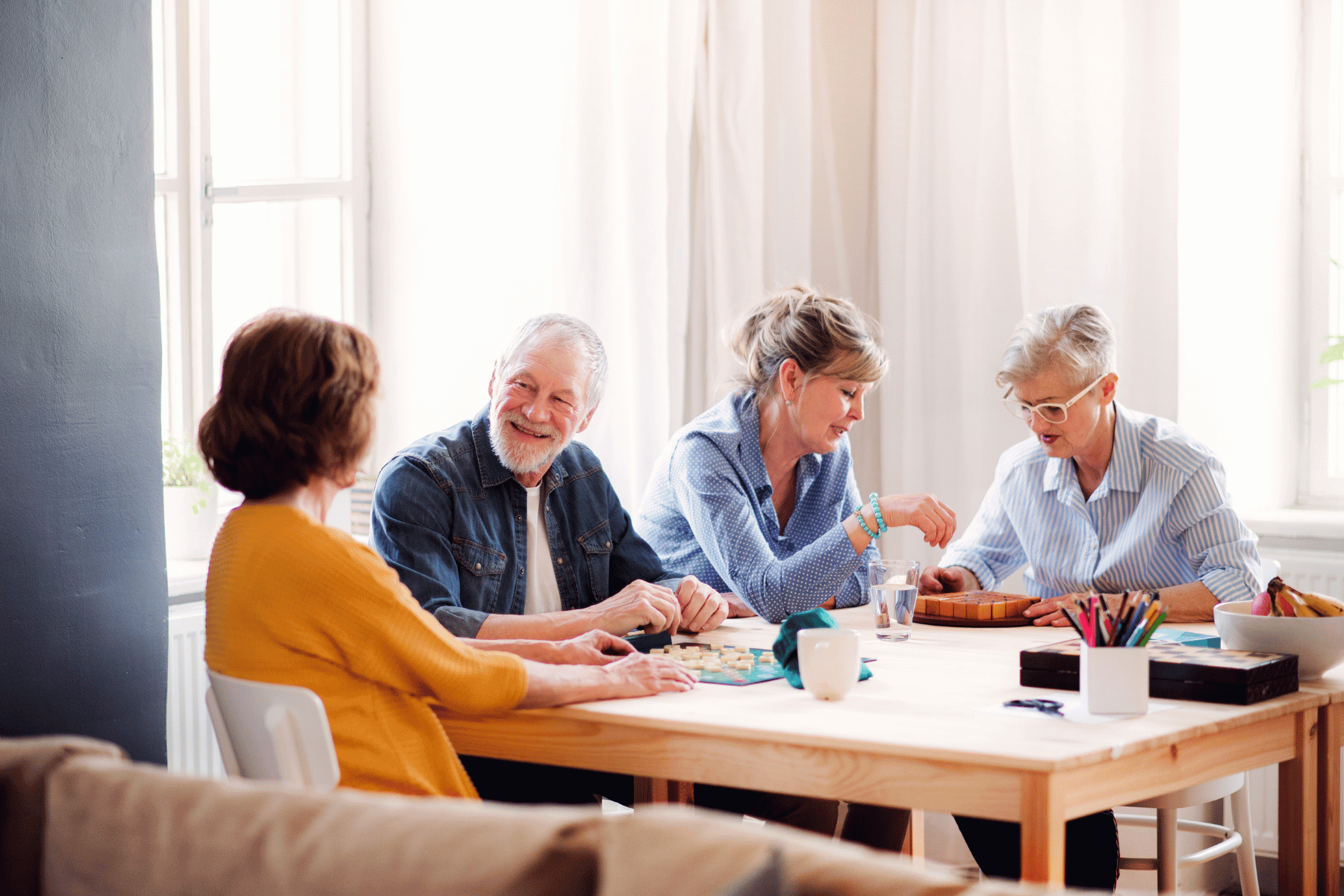 Board game night is a fun excuse to gather with loved ones and engage in some healthy competition. In addition to being a fun way to socialize, board games are also good for your health. Studies indicate that regular board game play can decrease your chances of developing dementia. The same study also notes that playing board games could increase cognitive function and may reduce your risk of developing depression.

Communities under the Bethesda Senior Living umbrella understand the importance of engaging in play in your later years. Board games are good for the mind and for the soul. They're also an easy way for you to combat boredom and engage with your adult children. So if you’re looking to shake things up on your next game night, here are 7 board games that are sure to impress your group.

Ready to test your spelling skills? Bananagrams is a spelling game that uses tiles, much like Scrabble. The difference is there are no turns in Bananagrams. Each player receives an equal number of face-down tiles from the bunch. At once, every player flips over their tiles and races to see who can spell the most words the fastest. The slowest player in each round is eliminated until there’s only one winner left standing.

Bananagrams is an easy choice for any size group as it can be played with two to eight players. There’s also a large-font version of Bananagrams for those who have trouble seeing.

No confusing rules here. Blokus is a simple game that includes colored pieces similar in appearance to Tetris blocks. Each player picks their color and proceeds to lay blocks down on the board. The objective is to lay more blocks down than the other players. The only rule is that your blocks must touch each other but can only touch on the corners.

Blokus is ideal for small groups of two to four players. There are a few variations of the original game, including this extra-large Blokus version that comes with bigger pieces.

Brain Freeze is a hilarious card game that engages your memory and reflexes. The game is pretty simple to learn. Essentially, all players lay down cards in turn until two players have cards with matching images. The pair with matching cards then have to race to answer the question on the card. Questions can be anything from  (blank) keeps me up at night to (blank) was the worst gift I ever received, and so on. Whoever answers first wins and keeps the cards. The player with the most cards at the end wins.

Carcassonne is a strategy-based game that involves laying tiles down to create roads and cities. Each player receives a team of “meeples,” which look like little wooden people. Players take turns placing tiles and deciding whether to claim that tile with a meeple or not. The objective is to build big cities and long roads and to prevent other players from doing the same. The bigger your cities and roads get, the more points you accumulate. Whoever has the most points at the end of a round is the winner. It may sound complicated, but Carcassonne is easy to pick up the more you play. The game can be played with two to five players.

Ideal for getting to know someone better, The Hygge Game is a cozy game filled with hundreds of thought-provoking questions. As you play, simply answer questions and watch the conversations start to flow. This game can be played with people of all ages and is ideal if you’re looking for something laid-back and noncompetitive.

Qwirkle is a simple game that involves matching tiles by shape or by color. The gameplay is similar to Scrabble. Tiles are placed in a bag, and each player draws six tiles to form their hand. Tiles placed must touch and must share one attribute (either color or shape). Like Scrabble, you earn points on the whole line when you add a tile to it. Bonus points are awarded when you finish a line. A finished line has six tiles; this is called a Qwirkle. This game is ideal for players of all ages and can be played with two to four people.

After everyone says their clue word, players are left to discuss who they think the chameleon is. If the chameleon is properly identified, that player still has a chance to win by guessing the secret word. If they guess wrong, they lose.


Winter Challenges for Those in Hospice and How Loved Ones Can Help

Independent Living Game Night: 7 Options to Bring to the Board Game Table

5 Tips for Talking About Dying With Your Loved Ones

Staying Safe as a Senior Driver

8 Signs of Caregiver Burnout

Dementia and Meal Time: Tips for Supporting Your Loved One's Nutrition

5 Tips for Maintaining the Mobility You Still Have

Advance Directives: Why Everyone Needs One and How They Support the Hospice Journey

5 Ways Respite Care Can Support Families During Summer Months

What Caregivers Should Know About Cooking With Loved Ones With Memory Diagnoses

Ways to Grow Things in Your Assisted Living Apartment

7 Apps for Senior Convenience and Independence

Travel Tips for Seniors During Spring and Summer

Tips For Being More Social This Spring and Summer

Spring Decorating Tips Older Adults Can Use in Small Spaces

Spring Cleaning the Safe Way: A Checklist for Seniors

9 Ways Older Adults Can Move More as Warm Weather Springs


Travel Tips for Seniors During Spring and Summer

Call us at (866) 406-5081 or
Schedule A Tour
of The Gardens Independent Living, Assisted Living and Memory Care in Springfield, MO.
Copyright © 2020 Bethesda Foundation